RESTAURANTS AGAINST HUNGER RETURNS TO SAVE LIVES 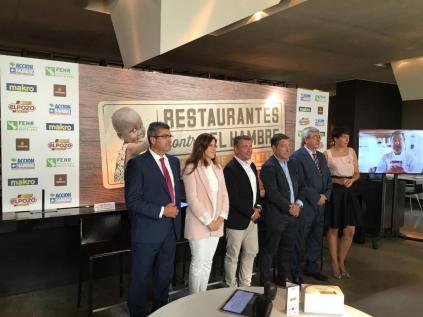 Cafés Candelas sponsors the Restaurants Against Hunger charitable initiative for the second consecutive year. It is a campaign by the Action Against Hunger NGO, supported by the Spanish Hospitality Association, which aims to put an end to child malnutrition.

What is Restaurants Against Hunger?

Participating restaurants select dishes or specials from their menus and assign them a donation of between €0.5 and €2 when one is purchased by their customers. Action Against Hunger is in charge of providing the promotional materials to each establishment to facilitate the communication of the campaign.

Although the solidarity dishes cannot be tasted until 15 September, Candelas is in the process of recruiting restaurants. Last year 54 restaurants signed up through the company’s sales network. If you have a restaurant and want to participate in this charitable initiative, please contact your Candelas representative and help us to save lives.

Last year €160,000 was raised among 861 establishments. This seventh edition expects to beat these donation figures and increase the number of participating restaurants. More than a hundred establishments are participating this year, thanks to the great work of our sales network. What about you? Are you going to join?

This year the renowned Chef Joan Roca has been chosen to sponsor the initiative and therefore has become the visible face of the recruitment campaign for restaurants. The chef will be accompanied by other well-known colleagues in the profession like Quique Dacosta, Paco Morales or Koldo Roder.

What happens to the funds raised?

The funds raised through the Restaurants Against Hunger are intended to help more than 15 million people. Action against Hunger combats malnutrition, ensuring access to drinking water and the security of populations in more than 45 countries.

Therapeutic peanut-based food that is needed to save a child’s life only costs €40. For this reason, with the donations of Restaurants Against Hunger it is possible to provide treatment against acute malnutrition for thousands of children.

How can we do our bit for this initiative?

In June we launched a campaign, after the entire sales network was given a few days training by the staff of the NGO. From this moment, our sales promoters and delivery vans have set to work to ensure that the largest possible number of restaurants join the charitable initiative.

There are already 130 establishments that have incorporated the "solidarity menu" into their menus as a donation, and thanks to the efforts of the Candelas sales network, the number continues to grow…Come on, and remember that this effort has a prize!